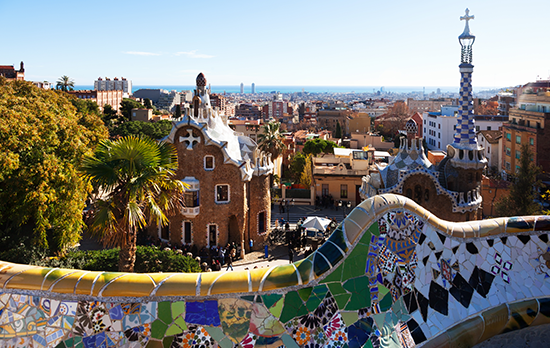 Located on the shores of the Mediterranean, Barcelona is one of the most beautiful cities in Spain, as well as one of the most cosmopolitan. The Catalan capital has much to offer visitors, such as its impressive modernist architectural gems. After its transformation during the 1992 Olympic Games, the well-known Ciudad Condal has become one of the most visited cities in the world.

Here is a list of the 5 must-see places to visit in Barcelona:

It is one of the architectural jewels of Modernism. Construction began in 1882, designed and overseen by the renowned Catalan architect Antoni Gaudí. It is a naturalistic style Catholic Basilica, in which all the elements flow in complete harmony, simulating a forest that changes appearance depending on the light that seeps in during the day. On the outside, the towers that are still under construction stand out, and once they are finished they will stand 172 metres high. The Sagrada Familia is the second most visited church in the world after St. Peter´s in the Vatican and the most visited monument in Spain together with the Alhambra, so we recommend booking your ticket online before going and checking the timetables on their website.

It is the oldest part of the city and its historical centre constitutes the biggest treasure of Gothic buildings anywhere in Europe. This area of the city, where the remains of the Roman city of Barcino are found, later became known as the “Cathedral Quarter” and is now referred to as the Gothic Quarter. Plaza Real is here, surrounded by 19th century neoclassical facades, Plaza de Sant Jaume, the Cathedral of Barcelona, the Puente del Obispo (Bishop’s Bridge) or you can wander through its medieval streets. You can also eat or get your hands on a nice souvenir, as it is full of bars, restaurants and souvenir shops. Many of the streets in the Gothic Quarter are pedestrianised and therefore no vehicles are permitted. You will have to park your motorcycle in the surrounding area and make your way there on foot.

It is one of the world’s most beautiful parks and another must-see to really experience Barcelona. It has been a World Heritage site since 1984. This huge park was designed by Antoni Gaudí and inspired by the undulating forms of nature. One of the most beautiful and well-known areas for visitors is Plaza de la Naturaleza, which has a famous undulating bench on one side full of beautiful mosaics and spectacular views of the city that are not to be missed. One of the most famous parts of the park is the Dragon Staircase, at the entrance to the park. Access was restricted a few years ago and now the maximum visitor capacity is 400 people every 30 minutes. We recommend booking your tickets in advance.

It is one of the best viewpoints from where you can see the entire city from up high, sitting right at the top of the Turó de la Rovira in the secluded Carmel district, at 262 meters above sea level. Here lie the remains of an anti-aircraft battery from the Spanish Civil War, where subsequently one of the last barrack quarters that took in migrants was set up. Despite being commonly known as bunkers, there have never been any bunkers at the top, only the anti-aircraft battery and its facilities. Accessing by motorcycle is a very good option as it is easy to park, but no matter what mode of transport you choose, you will inevitably have to walk a little to fully enjoy these breathtaking views.

THE BEACH OF LA BARCELONETA

This beach is the city’s oldest and most famous, at 422 metres long, it was remodeled just before the 1992 Olympic Games. It is located in the Barceloneta neighbourhood in Ciutat Vella, together with the San Sebastian and Victoria beaches. In Barcelona, there is an endless choice of fresh fish and seafood available in some of the restaurants and bars that line La Barceloneta, yet another one of the city´s legendary neighbourhoods. After a nice stroll along the sea, the Ronda Litoral can be taken for a stroll along the rest of Barcelona´s beaches to the north.