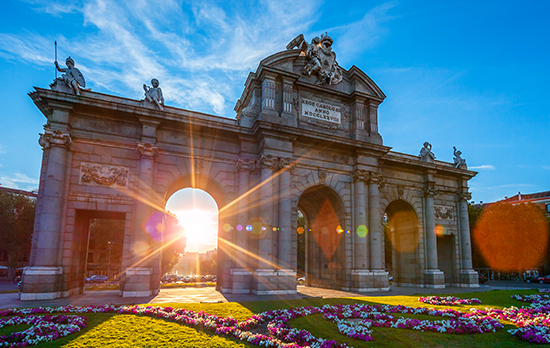 The Spanish capital is full of places to visit, experiences to live and history to know, it is easy to recognise all the greatness of the city. Madrid, at any time of the year, is synonymous with having a great time.

Here is a list of the 5 essential places to see in Madrid:

A historic garden and public park considered to be one of Madrid´s main tourist attractions, it is home to numerous architectural, sculptural and landscape ensembles from the 17th to 21st centuries, including the Palacio de Cristal, El estanque Grande, Monumento a Alfonso XII, La Puerta de Felipe IV, La Fuente de la Alcachofa, El Real Observatorio Astronómico and the two Romanesque hermitages. El Retiro is popular with tourists and locals alike for walking and doing sport; running and skating in particular. The park has several gates and is accessible from all the surrounding streets. Driving is prohibited inside the park, so you will have to park your motorcycle outside.

It is located in the heart of Madrid, in the Sol neighbourhood, next to Calle Mayor and just 300 metres from Puerta del Sol. The square dates back to the 16th century, when the main market and public events such as bullfights, acts of faith, etc. were held on the outskirts of the medieval town. The square´s name has changed throughout history, from the original name of Plaza del Arrabal to Plaza Mayor. The statue in the centre of the square represents Philip III, its construction was started by the Italian sculptor Juan de Bolonia and finished by his student Pierto Tacca in 1616.

It was originally one of the five Royal gates used to access Madrid from France or Aragon. Today, it is a monumental gateway located next to the Cibeles Fountain and Parque del Retiro.

The Puerta del Sol is a public square in Madrid, one of the best known and busiest places in the city. This is the centre (Km 0) of the radial network of Spanish roads, it´s also home to the oldest building, La Casa de Correos, where the clock tower was built and donated in the 19th century by José Rodrigez de Losada. It was originally one of the gates in the city wall that surrounded Madrid in the 15th century, and it owes its name to the sun that adorned one of the main entrance doors to Madrid. Nowadays, it is where the New Year is celebrated and broadcasted by Televisión Española.

This is an Egyptian temple dating back to the 2nd century BC, located in the Cuartel de la Montaña Park, near Plaza de España. The temple was donated to Spain by the Egyptian government to save it from floods following the construction of the great Aswan Dam. The Temple of Debod has two floors. On the upper floor you can see a curious miniature with the various temples in Nubia. The temple is surrounded by gardens and it is a very popular place for picnics, doing sports or simply relaxing on the lawn. The best time to visit is at sunset, when the setting sun bathes the temple in golden colours.

Also known as the Palacio de Oriente, its design dates back to the 18th century. Construction of the Palace began in 1738 and took seventeen years to complete. In 1764, it became Charles III´s habitual residence.

It is surrounded by the Campo del Moro gardens dating back to the Middle Ages and the Sabatini gardens created in the 20th century. The Changing of the Guard takes place every Wednesday from October to July at 11:00. The Royal Palace offers free guided tours for all citizens of the European Union throughout the year, closing only during official ceremonies.