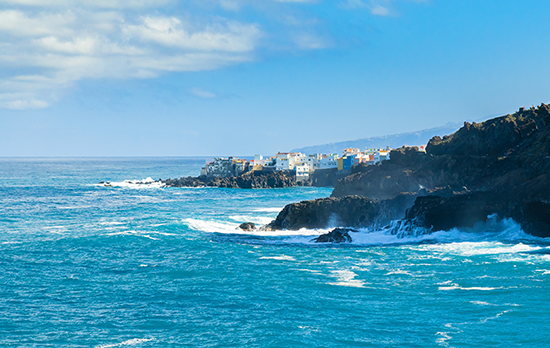 Tenerife is the largest of the Canary Islands and there are many things to do in both urban and rural environments, ranging from the beach to the mountains. In addition, it has places far from the crowds and with a special charm.

Here is a list of the 5 essential places to see in Tenerife:

As the highest peak on Spanish soil, it is a volcano over 3,700 metres high located in the heart of the island. The base can be reached by motorcycle and from there you can make your way up to the summit by cable car, although a permit is required to reach the highest point. The national park status was declared in 1954 to a total of about 190 km² that make up the Teide National Park, which includes other places of interest such as Pico Viejo, Roques de García, Alto de Guajara, Montaña Blanca and the Teide Observatory. The park has been a World Heritage Site since 2007.

At a stone´s throw from the Teide cable car station there is one of the most famous rock formations in Spain, the Roques de García. They have strange vertical formations, the result of the accumulation of different materials of volcanic origin and subsequent erosion, forming one of the most iconic images of Tenerife. In fact, the image of these rocks was used as a stamp on the one thousand peseta banknotes.

One of the must-sees in the north of Tenerife. They are an arboreal species (they are plants, not trees) typical of the Macaronesia region. The dragon tree of Icod de los Vinos is the most famous of its species due to its age, estimated to be somewhere between 800 and 1,000 years old, and its enormous size, 18 metres high and 20 metres in circumference at the base. You can see them free of charge from the viewpoint in Plaza Andrés de Cáceres, which you can access by motorcycle, or by paying the entrance fee to the Drago Park.

CAVE OF THE WINDS

This cave is located three kilometres from Icod de los Vinos. It is a volcanic cavity, shaped like a tube and created from lava from the first eruptions of the Pico Viejo volcano some 27,000 years ago. The section that can be visited is 200 metres long, although the tunnels explored stretch for 18 kilometres underground. It is thought to be the fifth largest lava tube in the world, after the four in Hawaii. Visits are conducted in small guided groups. The activity includes a projection, a specialist guide, helmets, torches, transport to the cave in a 4×4 and a short two-hour stroll through the forest.

The Playa Jardín complex, consisting of Playa Chica, Playa Jardín and Punta Brava, is one of the most emblematic attractions of Puerto de la Cruz. Designed by the famous artist César Manrique, these beaches are set in beautiful surroundings full of gardens with local vegetation, rocky caves and waterfalls. The beaches and the surrounding area are equipped with all the necessary amenities for a perfect stay. You can play in the waves, sunbathe, go shopping and taste the delicious Canarian and international cuisine.