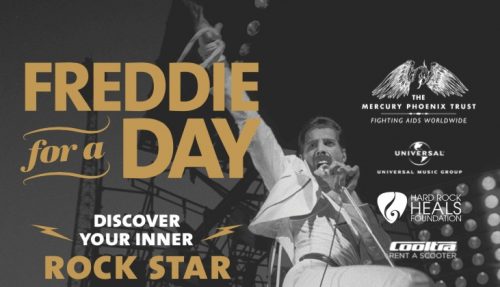 Cooltra is the official partner of the ‘Freddie for a day’ initiative at Hard Rock Cafe Roma
por Alterego2 | April 9, 2021 | 0 comentarios

September 5th is the 72nd anniversary of the birth of rock singer Freddie Mercury, and to celebrate, the restaurant chain Hard Rock Café has decided to organize a solidarity campaign called ‘Freddie for a day’ for which Cooltra is the official partner. The goal will be to raise as much money as possible for the fight against HIV.

To commemorate such a special occasion as is the anniversary of the birth of the leader of Queen, all scooter rentals made in the city of Rome until September 5th will have the option of adding as an extra a replica of Freddie Mercury’s mustache for just 2€. All profits raised through this initiative will go to the Mercury Phoenix Trust, which is fighting a global battle to combat the effects that HIV has on society.

The Mercury Phoenix Trust was born in memory of the iconic singer of Queen, Freddie Mercury, who died in 1991 due to HIV.

In the last 21 years, this foundation has donated more than 15 million dollars in his name.

The two Hard Rock Café restaurants located in Rome have prepared a day full of activities to celebrate his life. All customers can enjoy live music from groups honoring Queen, a competition to choose the best Freddie Mercury, and a spectacular cake to commemorate the anniversary of the birth of the iconic singer.

At Cooltra we are especially excited to be the official partner of the solidarity initiative, ‘Freddie for a day’, together with Hard Rock Café, and to do our small part to raise funds.