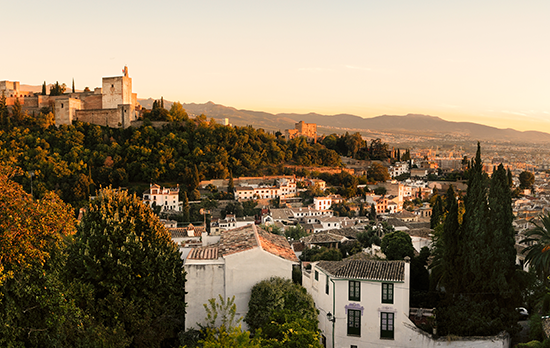 Granada is the essence of Al-Andalus and one of the most beautiful and visited cities in Spain. Unique monuments, charming neighbourhoods, viewpoints… not to mention its exquisite tapas. Its atmosphere will always leave you wanting more and you’ll want to come back again and again.

Here is a list of the 5 must-see places to visit in Granada:

Leaving Granada without visiting the Alhambra should be unthinkable. The Alhambra is a palace and fortress complex with gardens. It is also the city´s most important monument. There are many legends about why the name Alhambra, meaning “The Red” in Arabic, was chosen. It was built on Sabika Hill, one of the city´s highest points. At the time, it was intended to be strategically defensive while, at the same time, conveying a clear symbol. Inside and outside the walls of the complex settlement there are different areas such as the Alcazaba, the Nasrid Palaces, the Palace of Charles V and the GeneralifeI. Tickets can be booked online to access all areas of the monument.

The Church of San Nicolás was built in 1525 on the site of a mosque. This temple is Mudejar and Gothic in style. Its image is an inseparable part of the viewpoint of San Nicolás in the Albaicín neighbourhood. From the viewpoint, wonderful views of the Alhambra and the Generalife can be seen face to face, the city at their feet and the Sierra Nevada behind. It is undoubtedly a must-see while visiting Granada, and together with the Alhambra, it is one of the city´s most visited tourist attractions.

TAPAS ROUTES THROUGH THE CITY CENTRE

Granada is one of the most renowned Spanish cities for its generously sized tapas when ordering a drink. You simply show up at a bar or restaurant, order a drink and you will be served a free tapa. In Granada, ordering a drink means a free tapa. Some bars will let you choose the tapas while in others you will be served at random. The most famous tapas bars that come highly recommended are: Bar Los Pescadores, Los Diamantes, La Bella y la Bestia II and La Antigualla. Take your motorcycle and go on a bar crawl!

The tower was built using pieces of lapidary material coming from an ancient Roman necropolis nearby. It has a square base, 12 metres long on each of its sides. It also has three floors, with a total conserved height of 10.50 metres. You will have to travel by motorcycle to Huéscar, roughly 1 hour and 20 minutes from Granada city centre.

It is one of Granada´s oldest streets, as well as one of its busiest due to its undisputed beauty and historical importance. In fact, it is said to be the world´s most beautiful street. It runs parallel to the Darro River and separates two of Granada´s most important locations: the Alhambra and the Albaicín neighbourhood. It has a Romanesque, old and bohemian vibe due to the presence of historical buildings such as the Convent of Santa Catalina de Zafra, the Casa de Castril or the Arab Baths. Taking a stroll along it is a must.