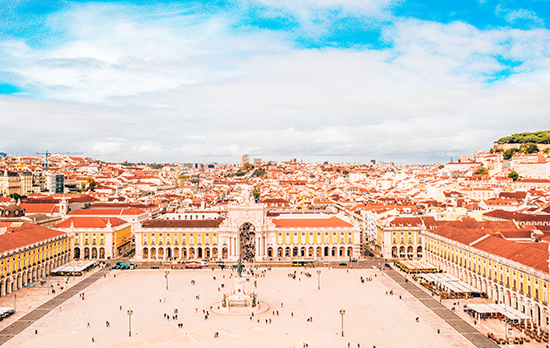 Lisbon is the capital of Portugal. It stands out for its privileged location at the mouth of the Tagus River, its fabulous gastronomy and a wide range of leisure activities suitable for all tastes and profiles.

Here is a list of the 5 essential places to see in Lisbon:

More than eight centuries old, this castle stands out among the windy alleyways of Lisbon´s highest hill. It was formerly known as Castelo dos Mouros, as it was a Muslim fortification reconquered in the mid-12th century by Alfonso Henríquez, the first king of Portugal. During the following century, when Lisbon became the capital of the kingdom, and right up until the middle of the 16th century, the fortress reached its maximum splendour. It was converted into a Royal Palace and hosted historic events such as the reception by King Manuel I of the navigator Vasco da Gama on his return from India. After the 1755 Lisbon earthquake, the castle was left in ruins and was not restored until the 20th century. You can book your ticket on the website to access all the areas of the monument.

On the banks of the Tagus stands the tower as a symbol of the city. It was declared a UNESCO World Heritage Site in 1983 and its location on the old Restelo beach, from where the caravels set off on their expeditions to other continents, is no coincidence. The tower dates back to the 16th century, the Discoveries era, when it was built as a fortress to protect access to the port across the Tagus. Over time, it stopped being used as a defence system, instead being used as a tax collection centre and even a prison. Before visiting the monument, we recommend taking a look at an interesting model of the monument at the entrance.

THE SÉ CATHEDRAL IN LISBON

This Romanesque cathedral is one of the Alfama district´s must-see sights. It is one of the few monuments to have survived the successive earthquakes and fires that have ravaged the city. Construction got underway in the mid-12th century, when Alfonso Henríquez and the first bishop of Lisbon, Gilbert de Hastings, commissioned the construction thereof over an old mosque after reconquering the city from the Muslims during the Second Crusade. Originally known as the The Patriarchal Cathedral of St. Mary Major, it was not until the end of the 14th century that it started being used as a cathedral. Admission is free, although visiting the cloister or the treasury costs €2.5.

This square is one of the city´s most famous, located in the Baixa neighbourhood; the heart of city life since the 13th century, when the area around the castle was the hub of daily activities and where the city´s inhabitants gathered. It has witnessed trials, festivals, parades, political and religious meetings, executions by the Inquisition, whose headquarters were located in this very square, and even bullfights…

It was completed in 1902 and was designed by the engineer Raoul Mesnier de Ponsard, with a neo-Gothic style and an iron structure. Inside, two wood-panelled lifts take visitors to a spacious terrace where they can get a breathtaking view of the Tagus River as well as Baixa, Rossio Square, Commerce Square and St. George’s Castle. There is also a café on the terrace for those who wish to have a drink while taking in the panoramic views. There are quite often queues for the lifts, so we recommend choosing the right time of day to go up. As it faces west, it is best to visit in the late afternoon to get one of the most beautiful views of Lisbon as the sun is setting.